Hue, is located in the Central Vietnam, was the national capital from 1802 to 1945. Although the Nguyen dynasty is no more, Hue is still a heaven for history and culinary culture lovers. This is the homeland of poets, artists and scholar, tourists will notice that different from other cities, female students in Hue still wear the traditional Ao Dai. Tourists who like a leisure trip or a historical trip, can spend a few days in Hue with no trouble at all. 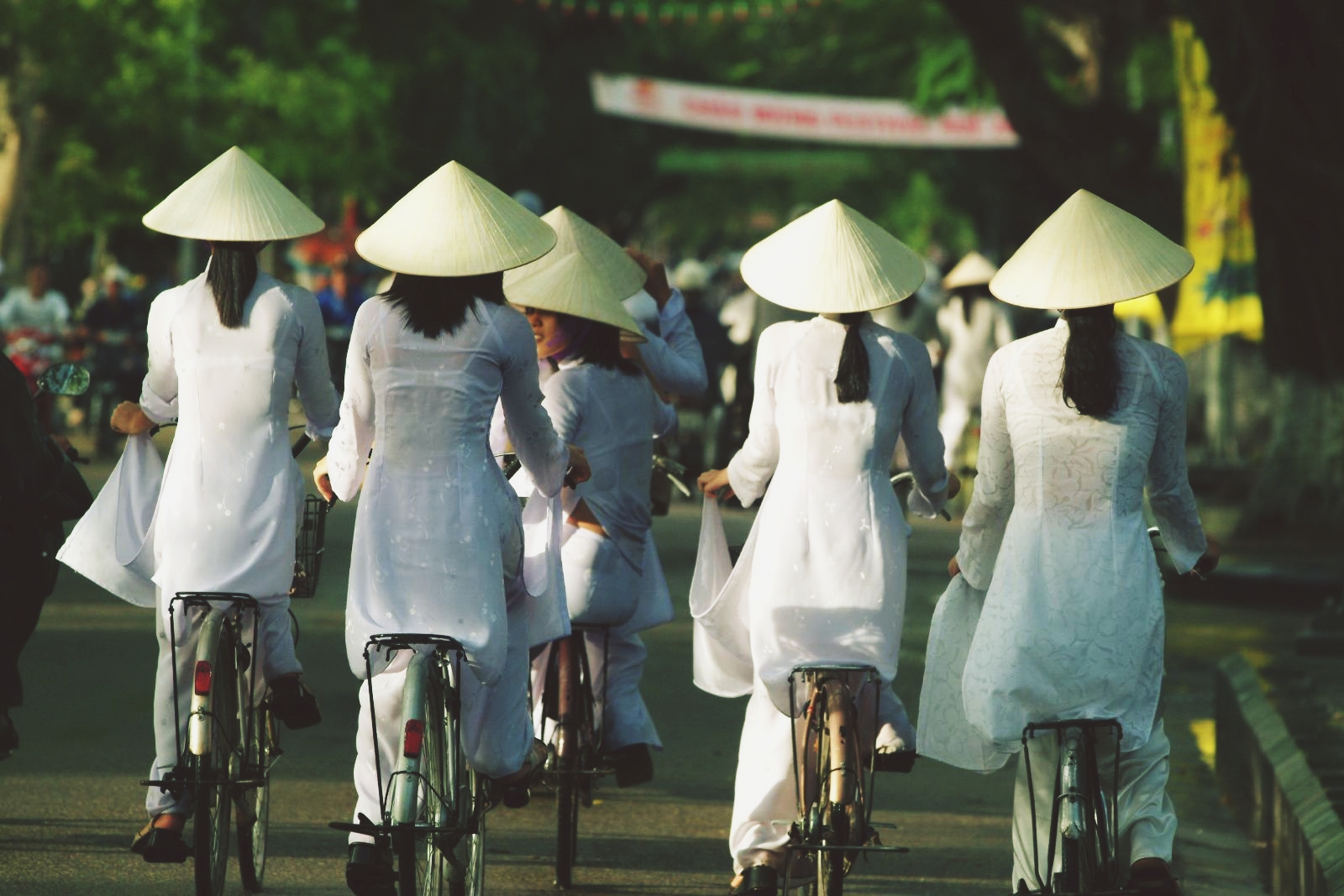 Hue used to belong to the Kingdom of Champa until 1306, when this land was exchanged for the hand of Huyen Tran Cong Chua – Huyen Tran Princess under the terms of a peace treaty. Then in 1558, Lord Nguyen Hoang arrived from Hanoi, established the two hundred years ruling of Nguyen Lords. However it’s until 1802 when Emperor Gia Long unified the country by moving the capital from Thang Long (Hanoi) to Hue. Under the Nguyen, Hue was a center of art, scholarship and Buddhism. Hue was capital of Vietnam until 1945, when Emperor Bao Dai abdicated.

Here is a list of must–see attractions in Hue:

Lying behinds the high walls, in the heart of Citadel is the Imperial City, are administrative offices, parks, temples and the Forbidden Purple City in the center. The Imperial City is influenced by Chinese architecture, which follows the same layout as Beijing’s Forbidden City. It is also called Dai Noi in Vietnamese, was built in a square shape, with four gates, one in each wall. 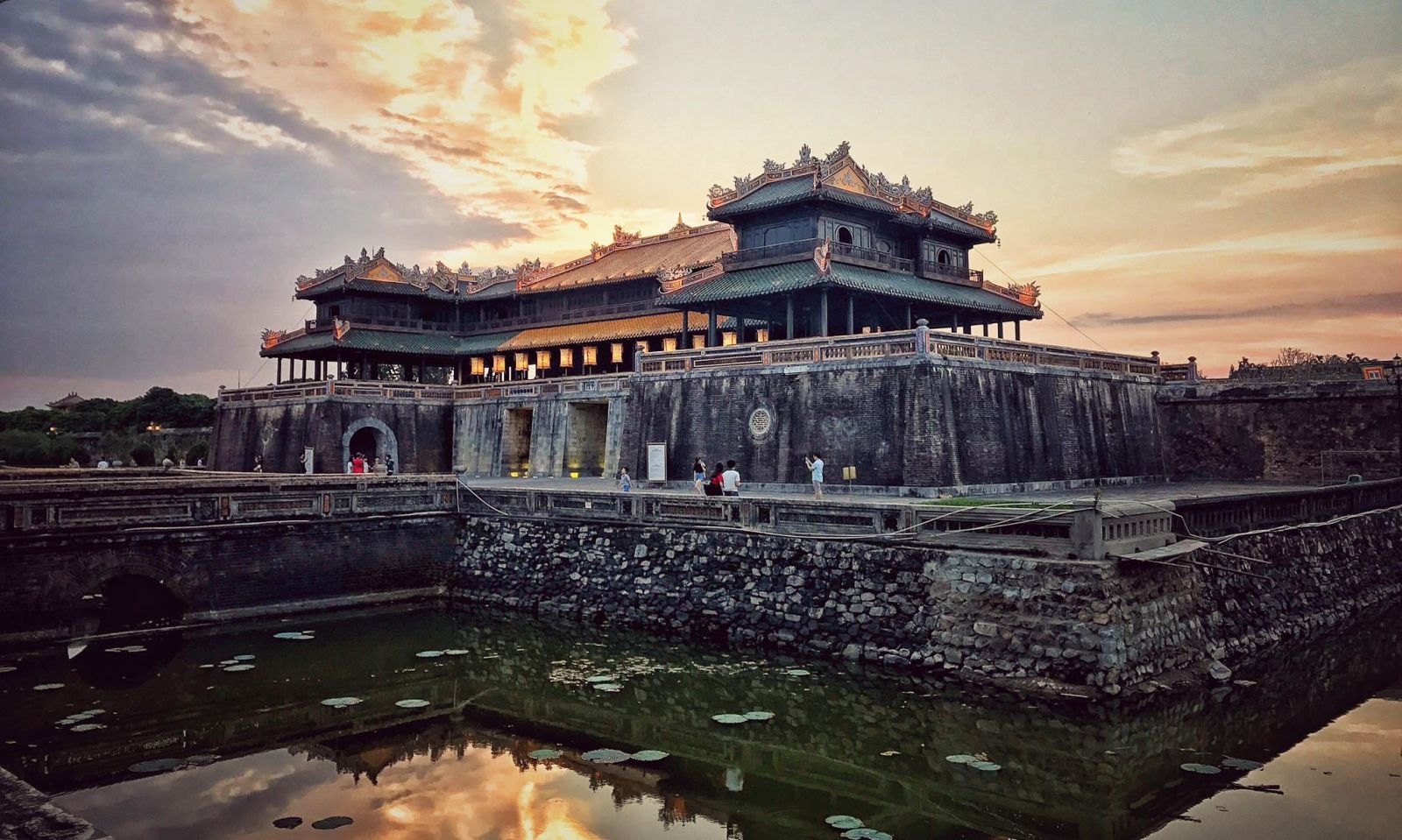 The Magnificent Imperial City in Hue

Crossing the Perfume River, tourists will see Dong Ba Market stretches from Truong Tien Bridge to Gia Hoi Bridge. This is the center of commercial life in Hue. Tourists can find everything they need in here, from fruit, fish, vegetable to silk or poem hat (non bai tho). Try to go shopping at Dong Ba market like a native Hue people: go by cyclo. 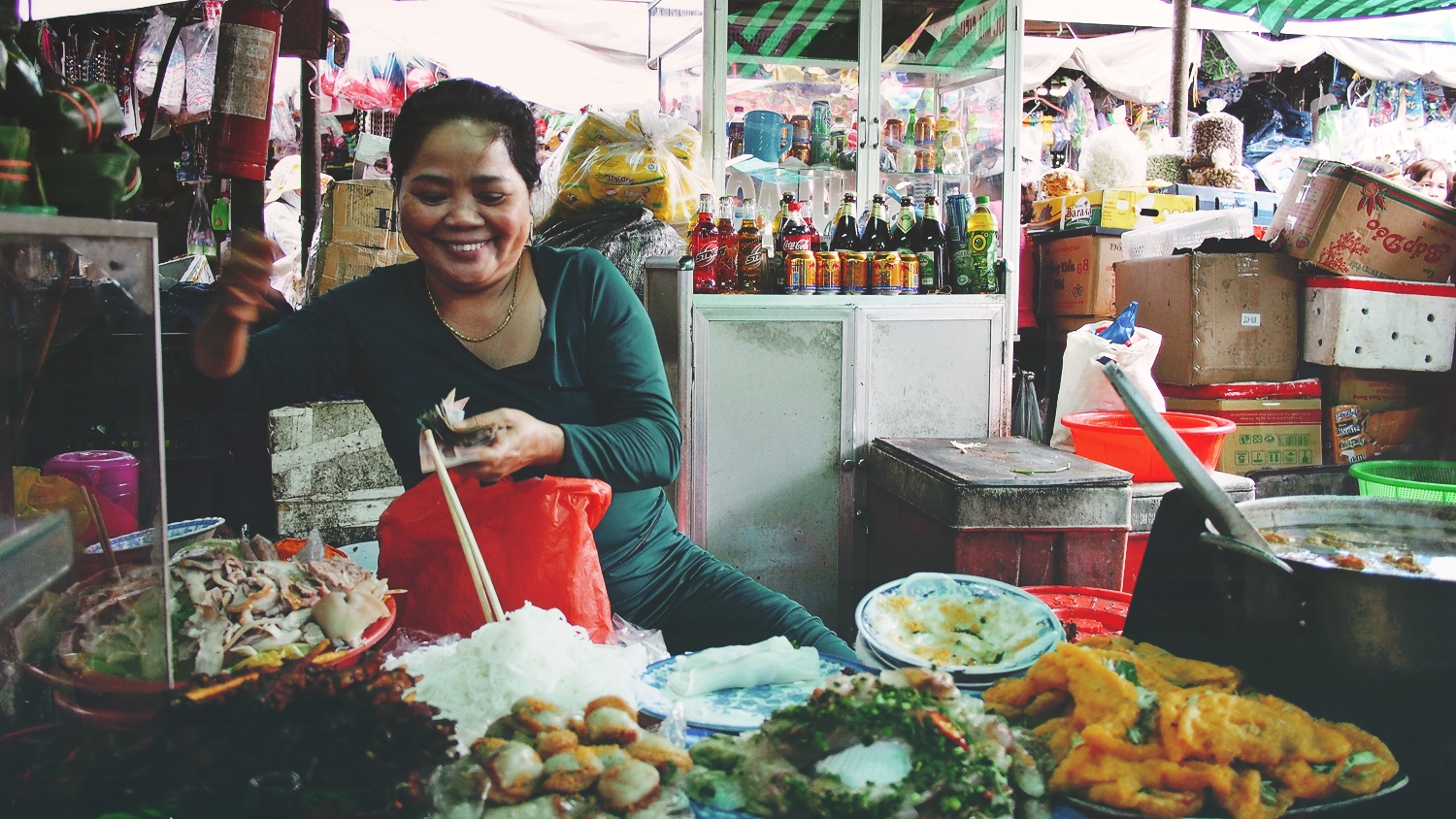 You can find everything you need in Dong Ba Market...

...and it's such a rustic experience going to the market by cyclo

Thien Mu Pagoda, is also known as Linh Mu Pagoda and the oldest pagoda in Hue, located about 3km to the west of the Citadel and was built in 1601. From there, tourists can admire a spectacular view of sunset on Perfume river. 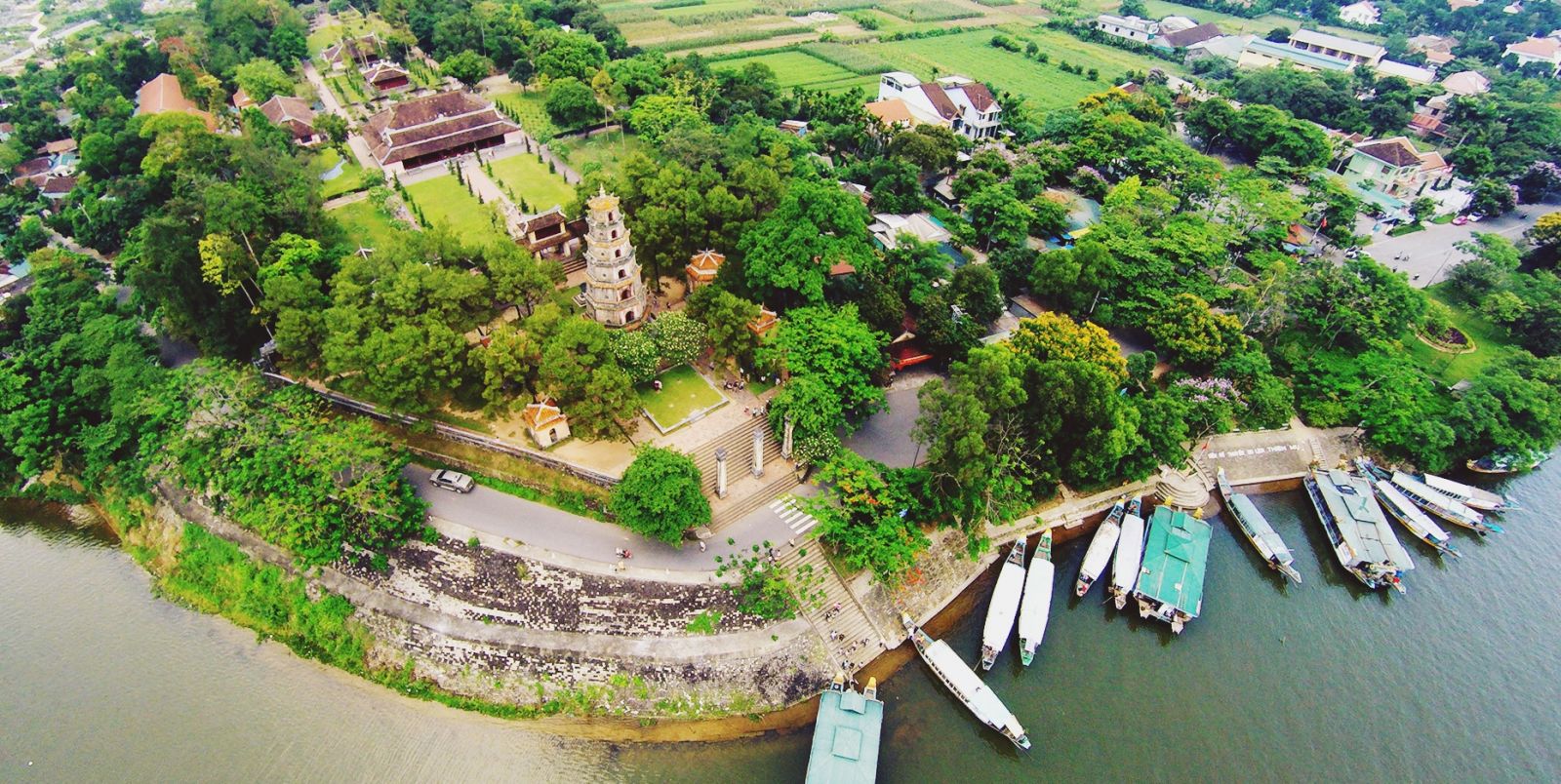 The Nguyen Emperors built their Royal Mausoleums among the valleys, river banks and forest hills, found themselves a quiet place to rest in their “after life”. Those are called “another home from home”. There are only seven mausoleums left in Hue because of historical reasons, but these mausoleums are so fascinating, from its architecture to its location. In this article, Hotelshoian.com is mentioning the three most famous mausoleums: Tu Duc, Khai Dinh and Minh Mang.

Tu Duc Mausoleum is the nearest one to Hue city center. Coming here, tourists found themselves lost into a peaceful place, like every other mausoleum. But this is the most harmonious mausoleum due to the careful designing – not a surprise when Tu Duc had stayed on his throne (1847 – 1883) longer than any other Nguyen Emperor. 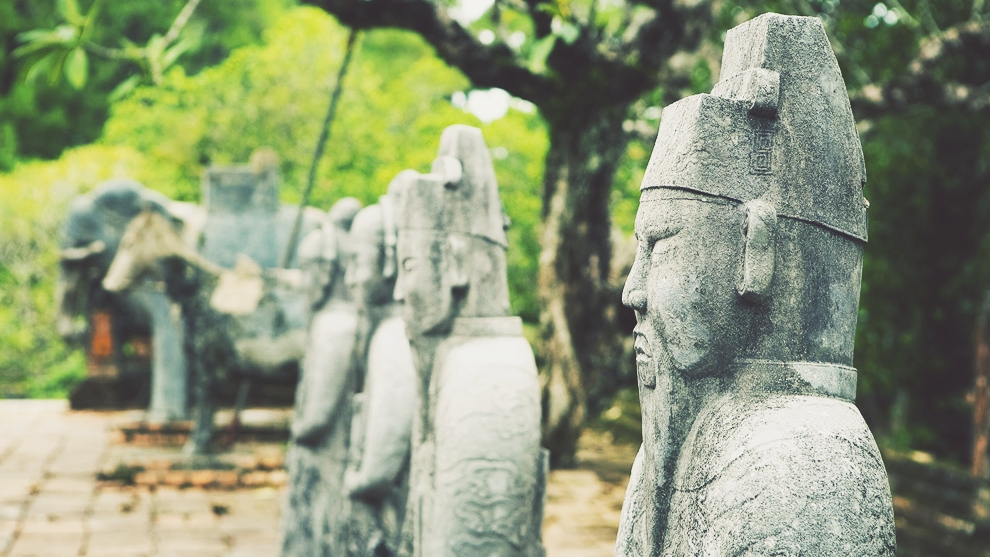 This mausoleum is a complex of European baroque, Sino-Vietnamese style and even some elements of Hinduism architecture. Although Khai Dinh only reigned for nine years, it took eleven years to complete this mausoleum, and the civilians had to pay additional taxes in order to build this.

Collums at the entrance gate is Hinduism influenced 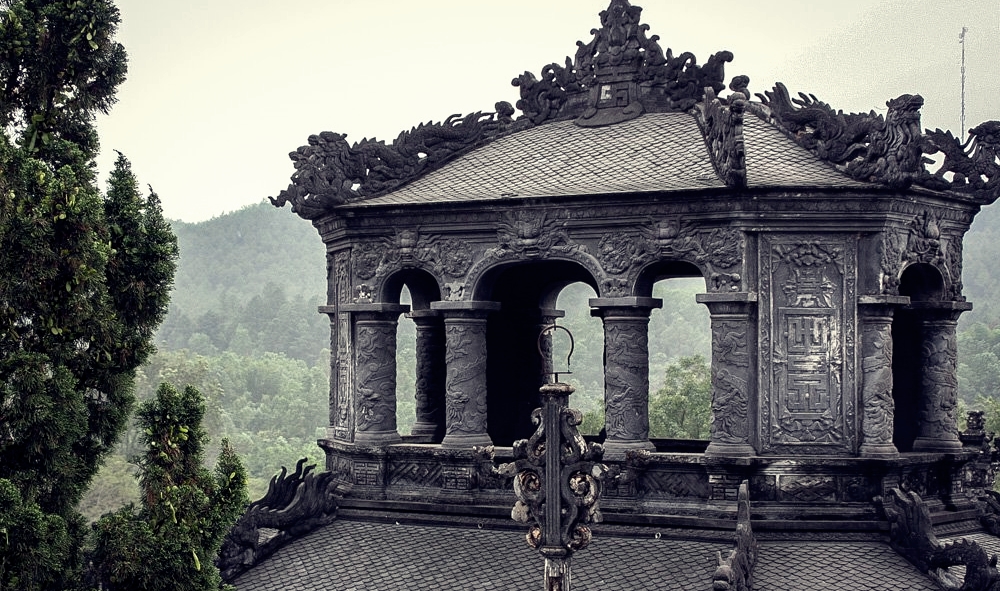 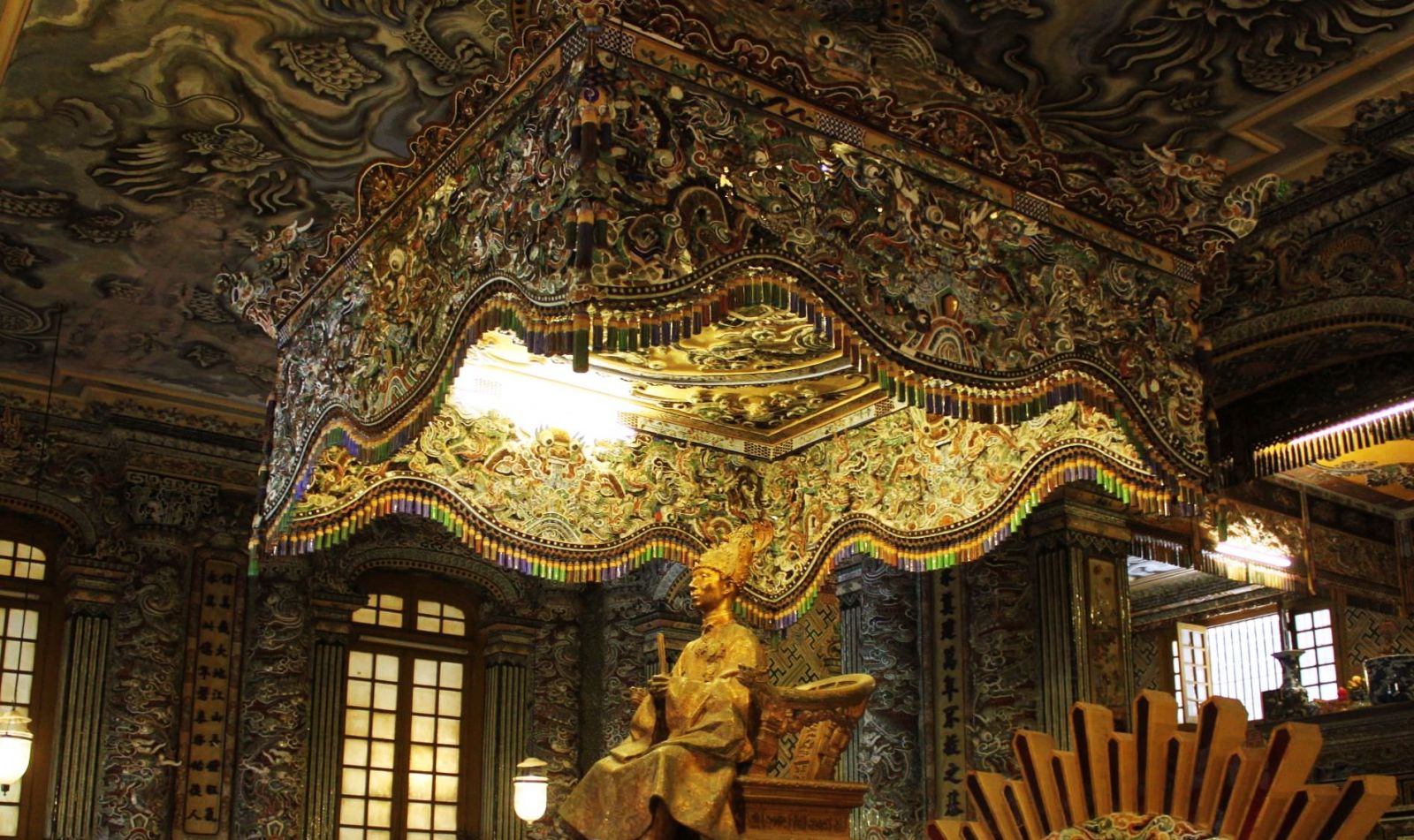 And the painted ceiling is European Baroque Style

It took Minh Mang Emperor fourteen years to find and consider the location of the mausoleum. Although Minh Mang passed away in 1941, his son, Thieu Tri, continued the project and finished it in 1943, after three years of work. Wild hills were transformed into this massive mausoleum by humans. Minh Mang Mausoleum is designed along traditional Chinese style: symmetry.

Minh Mang was the second Nguyen Emperor, managed to be the father of 142 children with his 33 wives and 107 concubines. 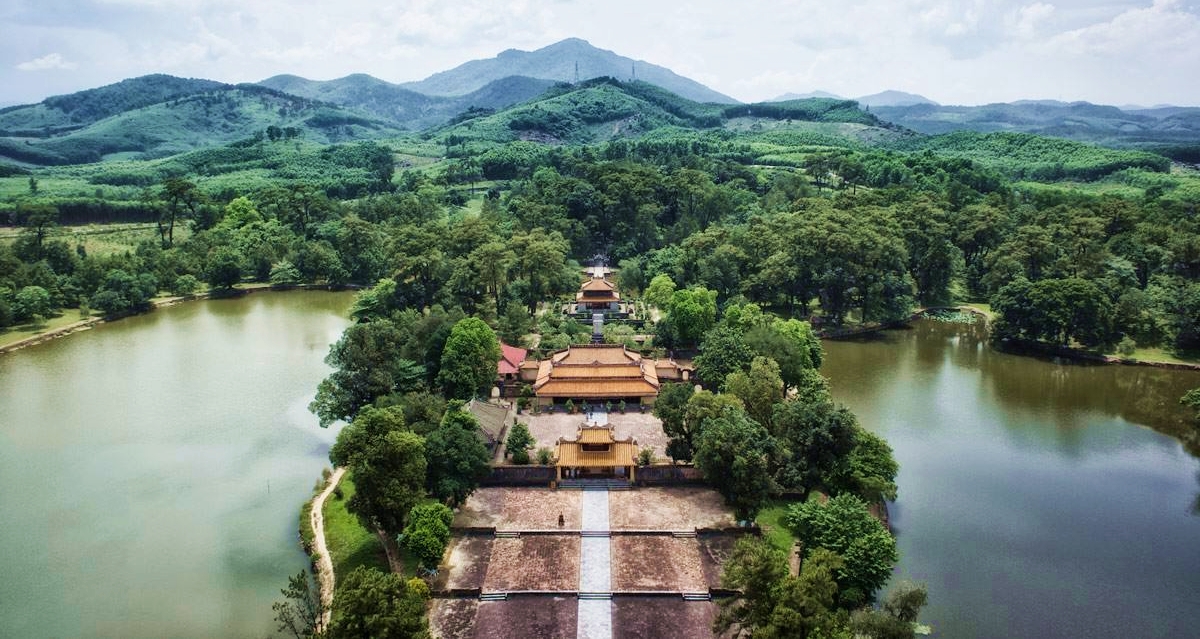 This is the best place to run away from tourists. Bach Ma National Park is an eco-tourism destination in Hue. Bach Ma is famous for its spectacular waterfall and diverse biology system. This mountain was a French summer resort and many luxury villas were built. But now most of them are abandoned.

Tourist can get to Bach Ma National Park easily by following the highway between Hue and Da Nang.

Hue is the land of food. Its cuisine is a complex of delicacies and commons dishes, due to its history of being a capital during the 19th Century. One of the reasons for tourists to stay in Hue for a few more days is to taste its special foods. And the best places to eat them are at local stalls or street kitchens.

Best way to eat local food is at the street kitchen

It takes an all day long to list all the type of Hue cakes because there are more than two hundreds types of cake including sweeten and salty ones. Tourist will find themselves lost into the maze of cake!

These are some popular cakes at least tourists should try during their stay in Hue:

The reason why these cakes are listed together is most of the street kitchens will serve all three of them, so that tourists don’t have to go from store to store. These cakes are steamed and served with fish sauce. 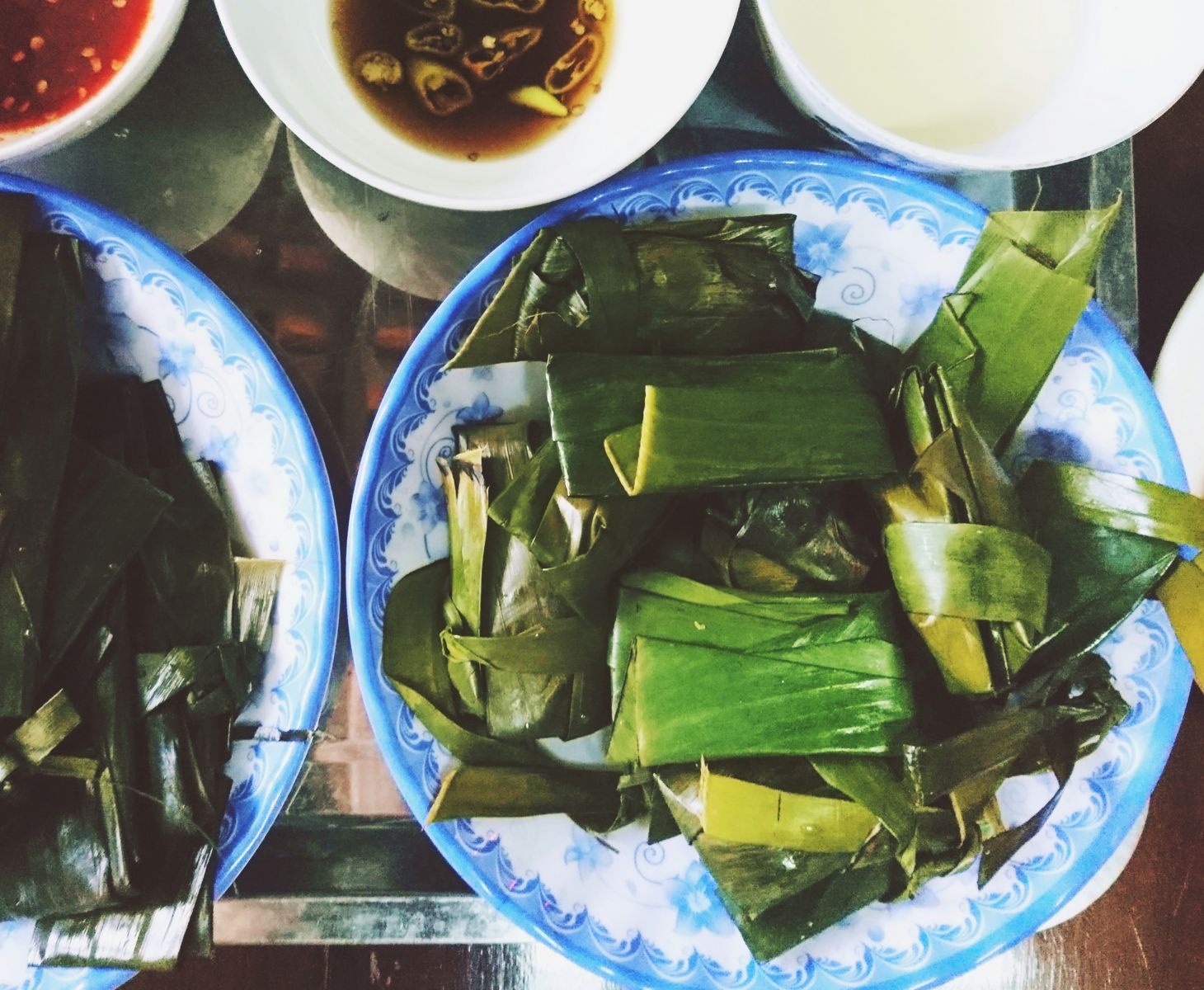 The Traditional "Banh Loc" of Hue

Even it’s “banh” (cake), but it has a different way of preparation. Banh khoai is fried and served with cooked bean sauce. 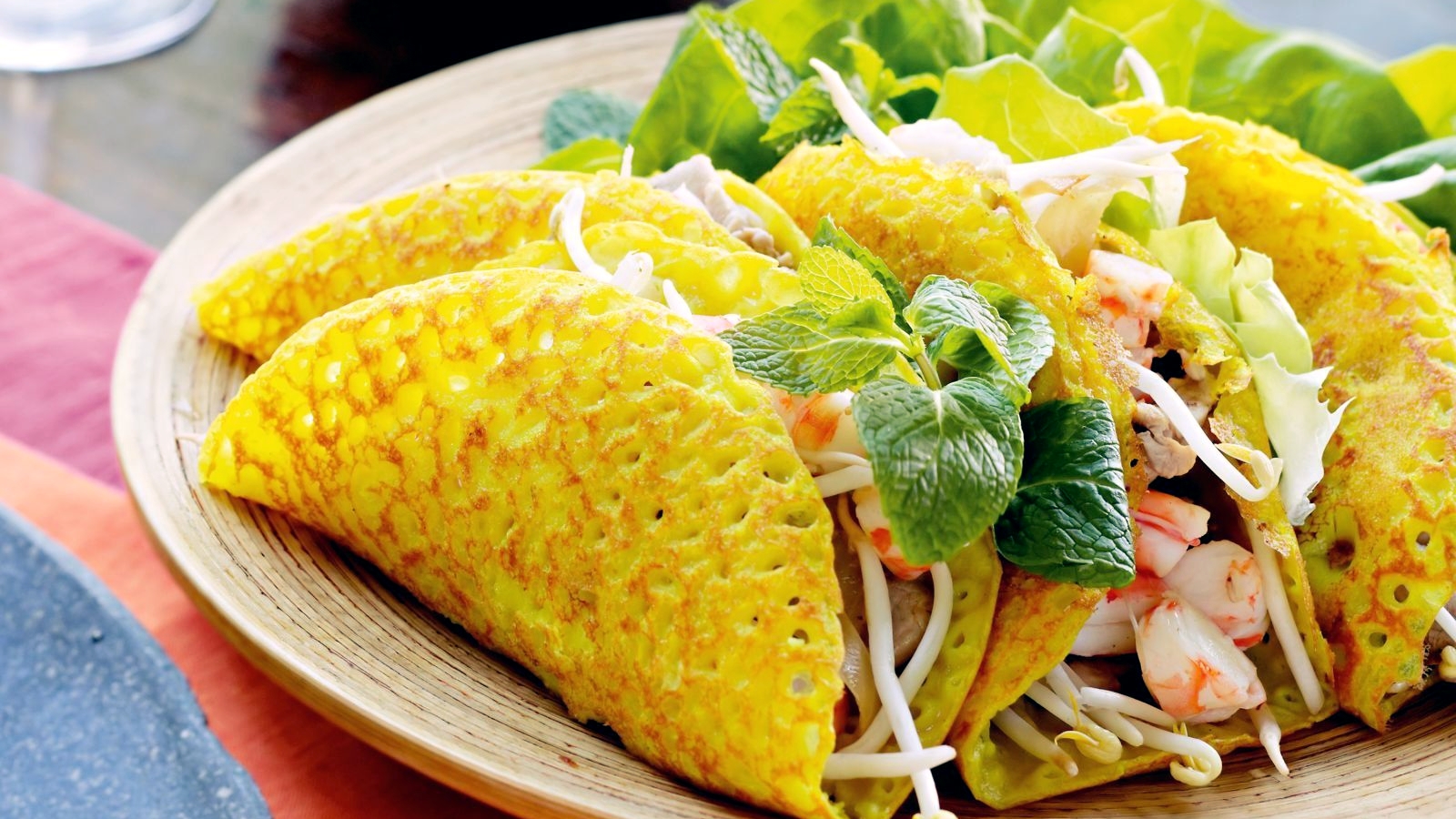 Being influenced by Chinese cuisine, noodles is one of the most popular type of dishes in Hue. But just “noodle” can’t tell a story, tourists need to determine what type of noodle as well. From Bun Bo (noodle soup with beef) to Bun Thit Nuong (noodle with pork), their ways of preparation are totally different. Tourists, again, will lost in the maze of noodle!

Some tourists consider this is a drink. But to Hue people, this is a food. Most of the types of sweet soup are made of beans, although the must-try one is lotus seed sweet soup (che hat sen) – which used for dedicated to the Royal family. 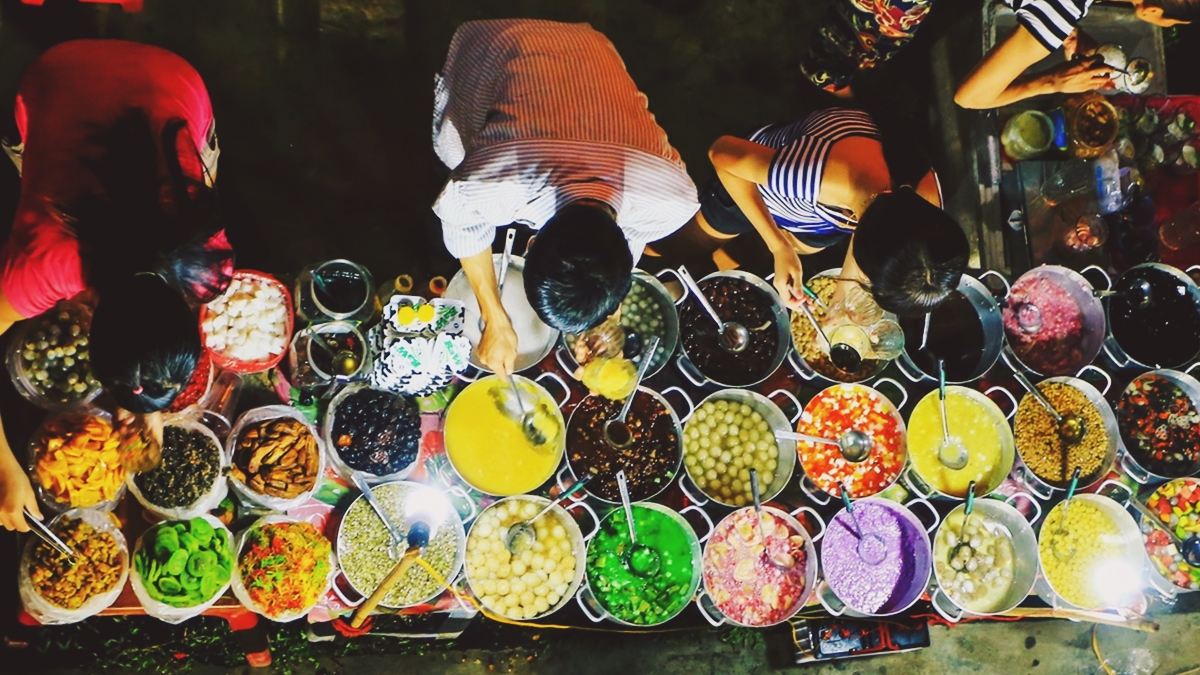 Sweet Soup (Che) of Hue is a symphony of colors

So beside street food, tourists also need to try a typical Hue meal in a formal restaurant if they want to experience how a daily life of native Hue people is.