From Da Nang, heading South for about 30km, tourists will get to the Ancient Town of Hoian and take a step back in time to a South-East Asian trading port during the fifteenth century to nineteenth century, which was noted since 1999 as a UNESCO World Heritage Site.

A brief history of Hoian

Hoian, was formerly known as Fai Fo, is an Ancient City which has been an important maritime trade city of the Southeast Asia.

Back all the way to the second century BC (at least), when the Sa Huynh Culture was still prosperous, Fai Fo was the trading center exchanged goods with China and India.

But it’s until the fifteenth century when Cham people rule this land, Fai Fo became a rich culture region and a bustle harbor city. Goods were exchanged between Arabian, Chinese, Middle East civilians, Indian and Persian.

By the end of fifteenth century until seventeenth century, Fai Fo was the most crowed and bustling city when lots of trading vessels of the Silk Road arrive and depart from here. Then when Hoi An’s harbor began silting up, Da Nang, with the French supports, rise up as a major port of the Central.

Despite of the effort to rebuild the city and to establish an administrative center in Hoian, a storm in 1916 washed away all the rail tracks were built and no one repaired them. Hoian was left untouched for almost two centuries.

Fai Fo was renamed to Hoian in 1954, as a Vietnamese name. Nowadays, it’s a bustling city, not as lively and modern as Da Nang, but in a peaceful way. Tourists can enjoy a lot of festivals and traditional activities which have been recreating.

Where to visit in Hoian

As a well-reserved harbor city and influenced by a lot of cultures, Hoian Ancient Town is a UNESCO World Heritage Site since 1999. This makes Hoian Ancient Town the most popular attraction among others in Hoian. By entering the Old Town, visitors will have to buy tickets in order to visit around, and they should not miss:

The only old bridge left nowadays, Japanese Covered Bridge is called Chua Cau in Vietnamese. It’s rumored that this bridge is built in 1593. Japanese Covered Bridge had been going through a lot of restorations, so although it’s named “Japanese”, it’s hard to see any remaining of Japanese architecture on the bridge, which had been through a lot of restoration. It’s also rumored that the Mamazu monster has its head lying under Japan, its tail under India and its body under Vietnam. Then every time it moved, earthquakes and flood was caused. This is why Japanese built the bridges with stone statue of Dog and Monkey deities. 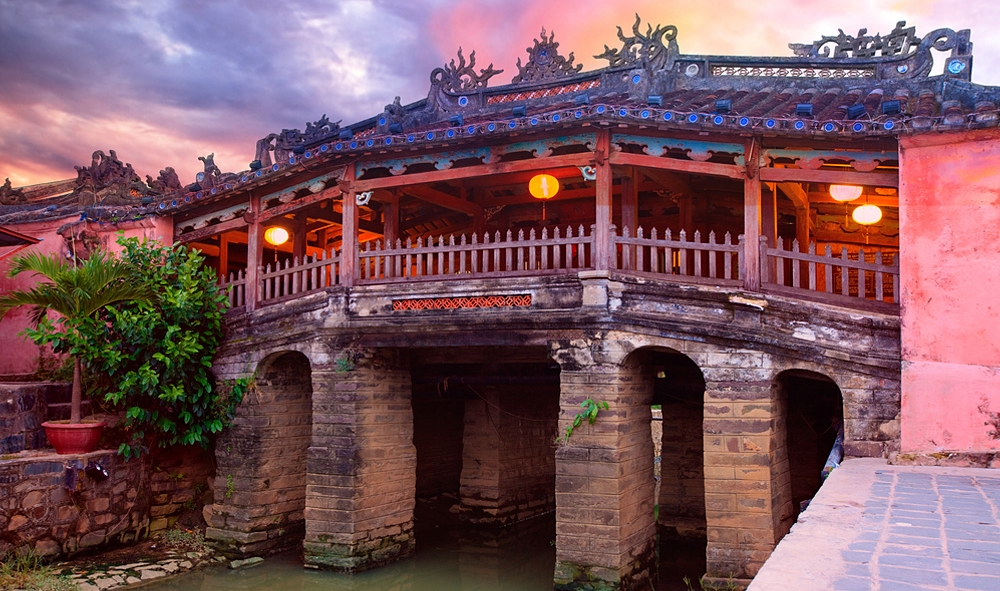 Japanese Covered Bridge is now the symbol of Hoian.

One of the significant characteristics of Chinese people is they always organized themselves according to their place of origin. Now there are still five Assembly Halls remaining correspond to each ethnic Chinese population: Phuc Kien (Fujian), Trung Hoa (Zhonghua), Trieu Chau (Chaozhou), Hai Nam (Hainan) and Quang Dong (Guangdong). 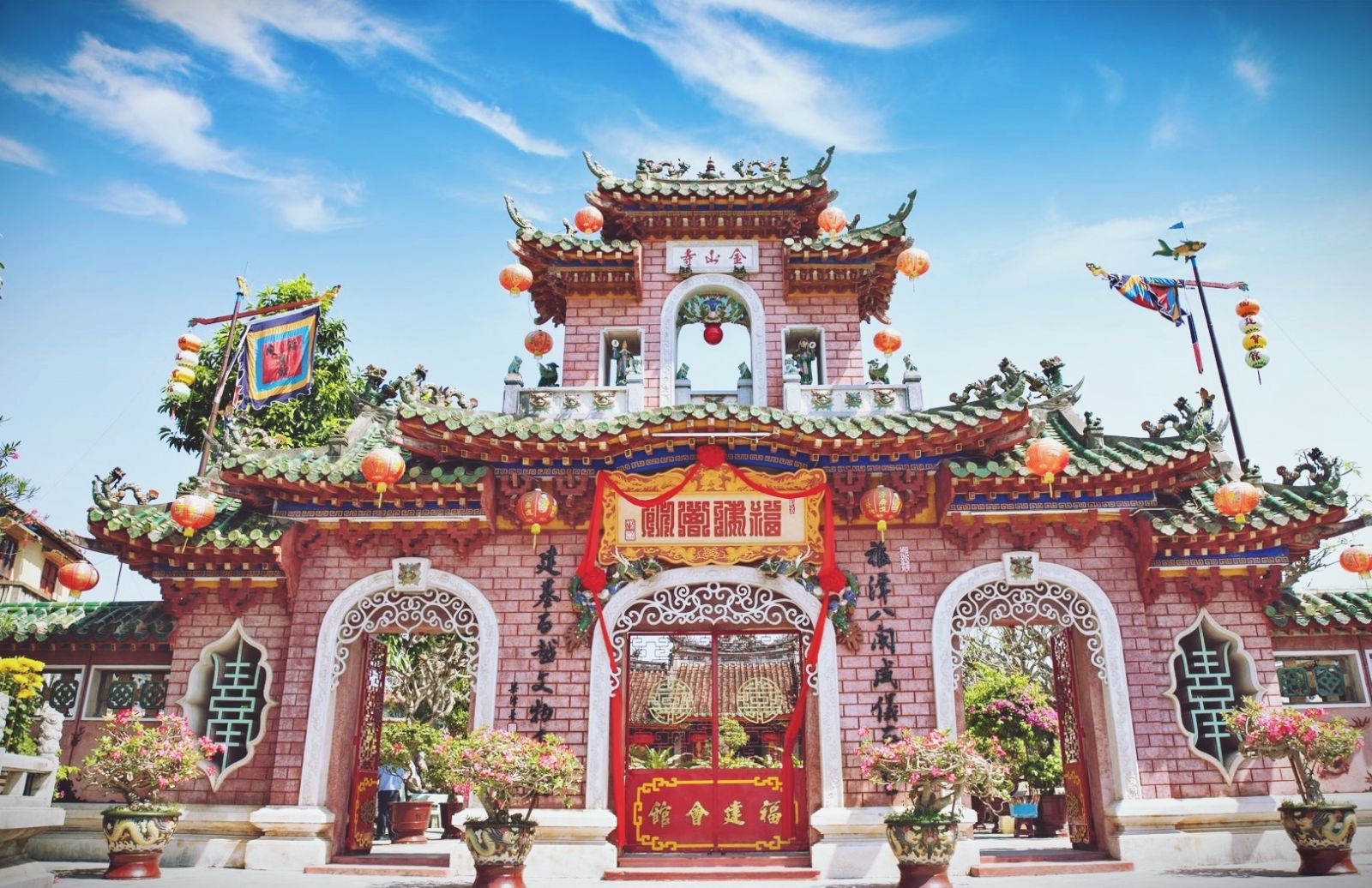 In those five Chinese Assembly Halls in Hoian, Phuc Kien is the biggest one

The owners of these merchant houses had different origins. And they are here for one purpose: trading. Like Phung Hung House has been belonged to a family from Hue for more than 100 years ago. Tan Ky House, which is considered the oldest, the most beautiful and well-preserved old house of Hoian Ancient Town, was built more than 200 years ago by a second-generation member of Tan Ky family, Chinese political refugees. Beside those merchant houses as mentioned, Duc An House and Quang Thang House are also popular merchant houses which still preserve the beauty of Chinese and Japanese architecture influences. 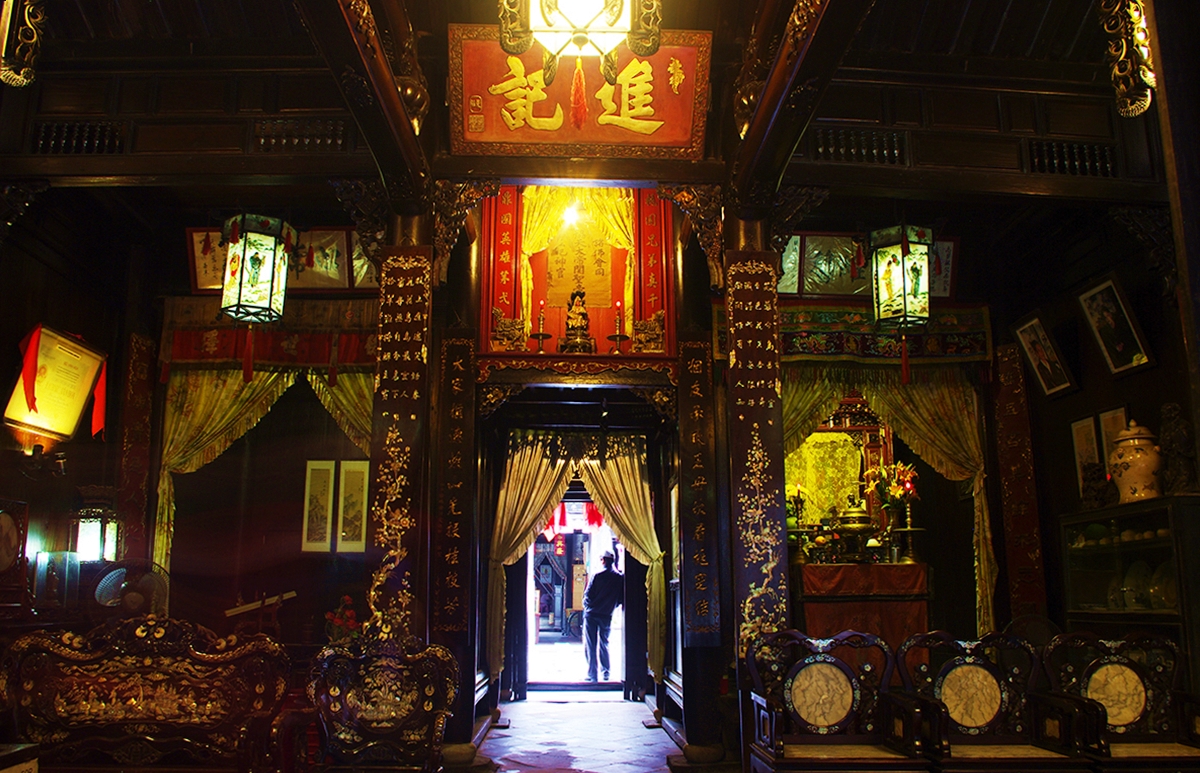 Like any other places in Vietnam, there are a lot of Family Chapels in Hoian, where the next generations of the family worship their ancestry and take care of the property. But different from other Family Chapels in the rural areas, the ones in Hoian were built in urban style. 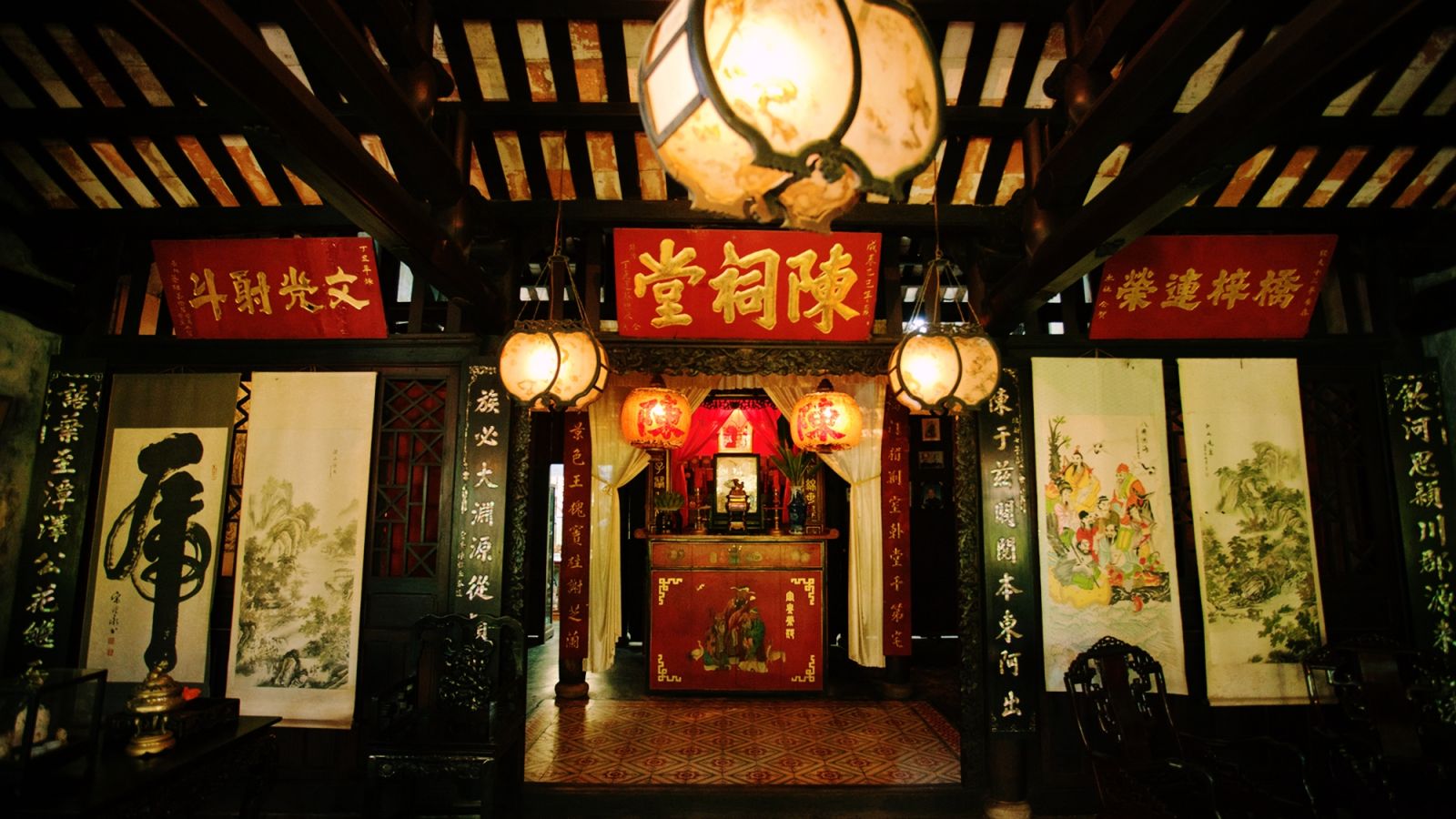 Coming to an Ancient Town, the best way for tourist to explore the glory history of Hoian is to visit museums. There are several museum gather around the Ancient Town of Hoian. Each museum has its own beauty and interesting, due to each museum reflects and displays a different period of time.

Such as Museum of Sa Huynh Culture focuses on Sa Huynh Culture in Vietnam around 2 thousand years ago. Museum of History and Culture stores the evidences from the prehistoric time until the nineteenth century. Museum of Trade Ceramics is also a popular museum, which shows the history of Hoi An’s ceramics trade during its heyday in the fifteenth to sixteenth centuries. There are other museums about a lot of interesting eras that tourists need to take a look if they have time. 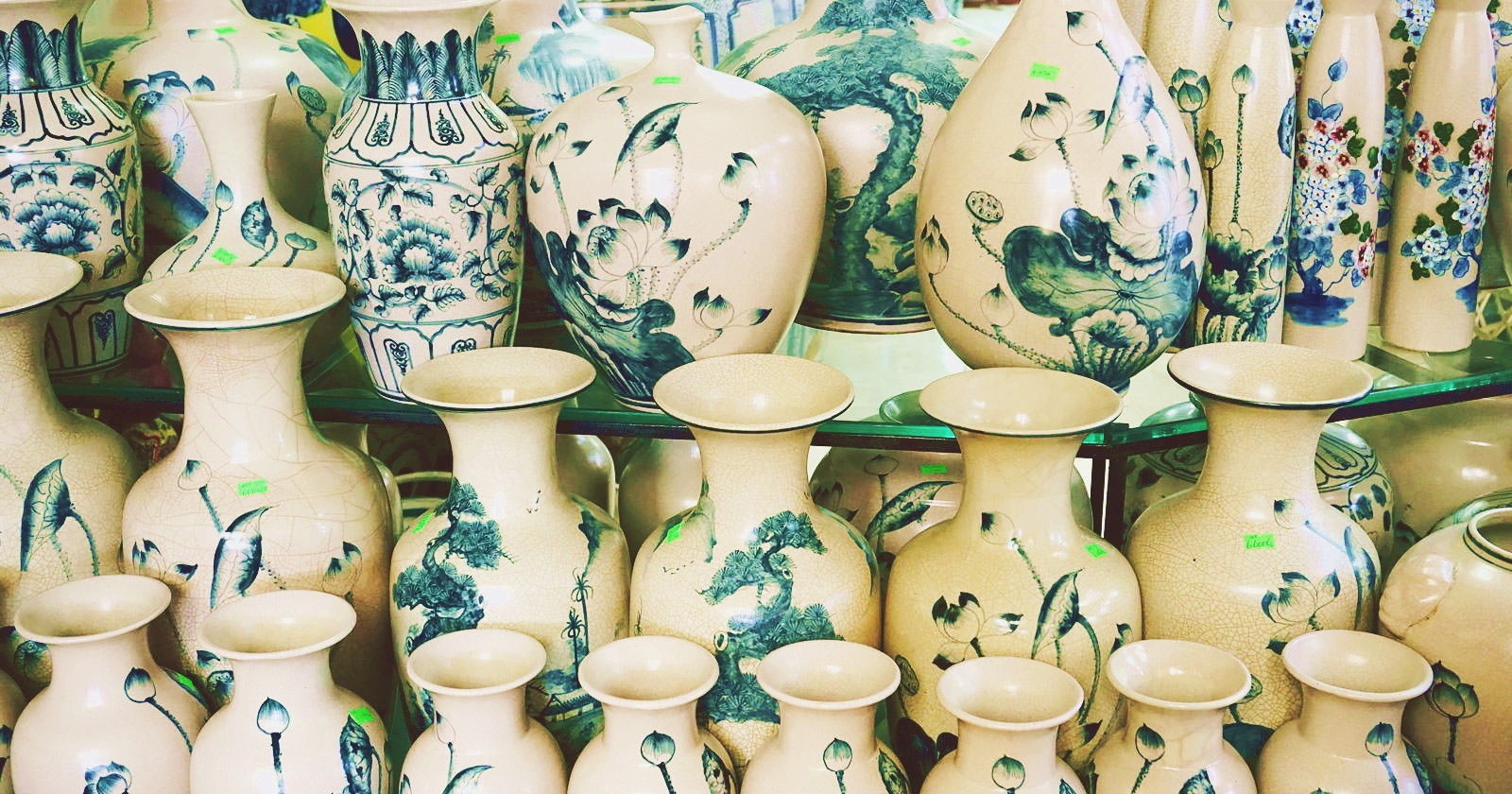 Inside the Museum of Trade Ceramic in Hoian

By visiting markets, tourists will have chance to explore the daily life of local people here. Like the way they purchase goods and other stuffs. Tourists can visit different markets by day and by night such as Hoi An market (during the day), Thanh Ha fish market (from 01:00am to 04:00am) or Nguyen Hoang night market (by night). 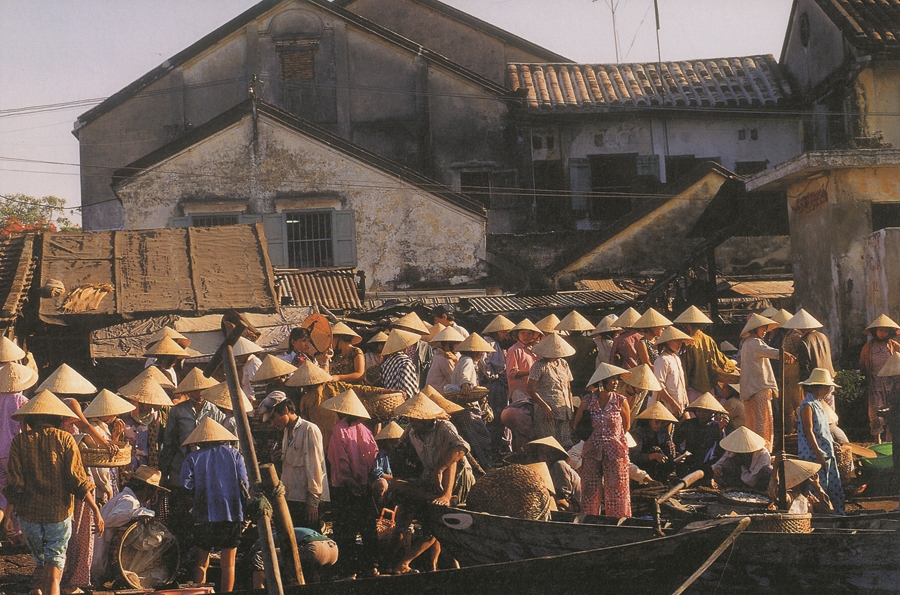 One of the best places to stay in Hoi An is on An Bang Beach and Cua Dai Beach, for any tourists who want a quiet stay, to walk away from the bustling center. This is a perfect place for relaxing: lying on beach on a sunny day while holding a cold drink, just be sure to put sunblock on. From here, tourists can take a 4km bicycle ride to get to the Ancient Town. However, this is not a good choice if tourists coming here during the rainy season (from late September to February). 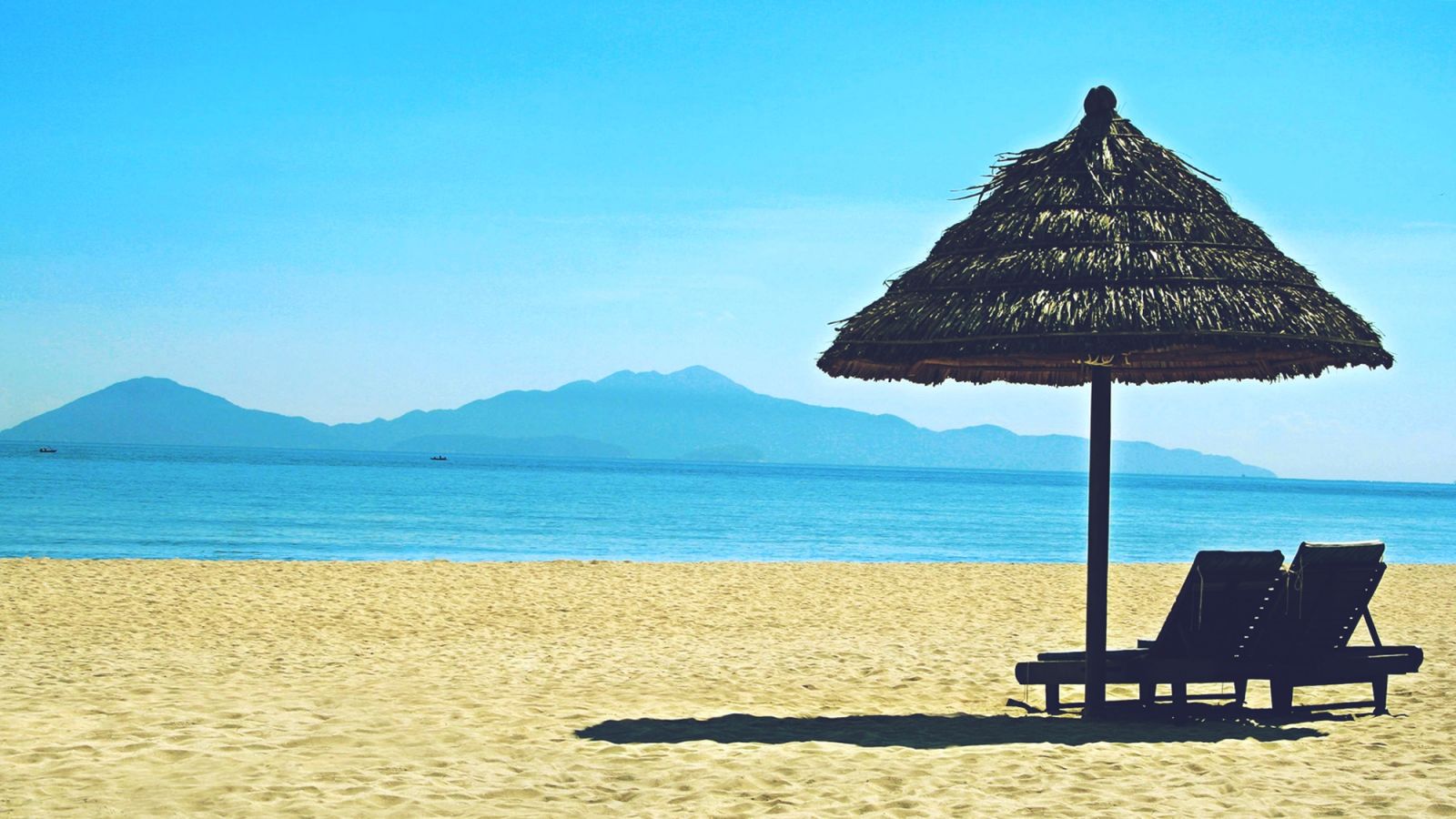 From the center, if tourists go along Hoai River to the Southeast about 5km, they will get to a mangrove forest of coconut water – Bay Mau.

Bay Mau Water Coconut Forest was a military base of Viet Cong in the resistance and is one of the core zone of biosphere reserves Hoi An - Cham Island. Getting here, tourists will have chance to enjoy the fresh air, to row the basket boat around the mangrove forest and to take part in the basket row dancing show on the water.

Traveling to the Northeast of Hoi An Ancient Town around 3km, passing through fields and villages, tourists will get to Tra Que Vegetable Village. There are a lot of activities to do in this village, such as attending a cooking class, doing the farm work, riding the buffalo or even get a herbal foot massage. All of these activities are some kind of rustic and would be a well choice for relaxing. 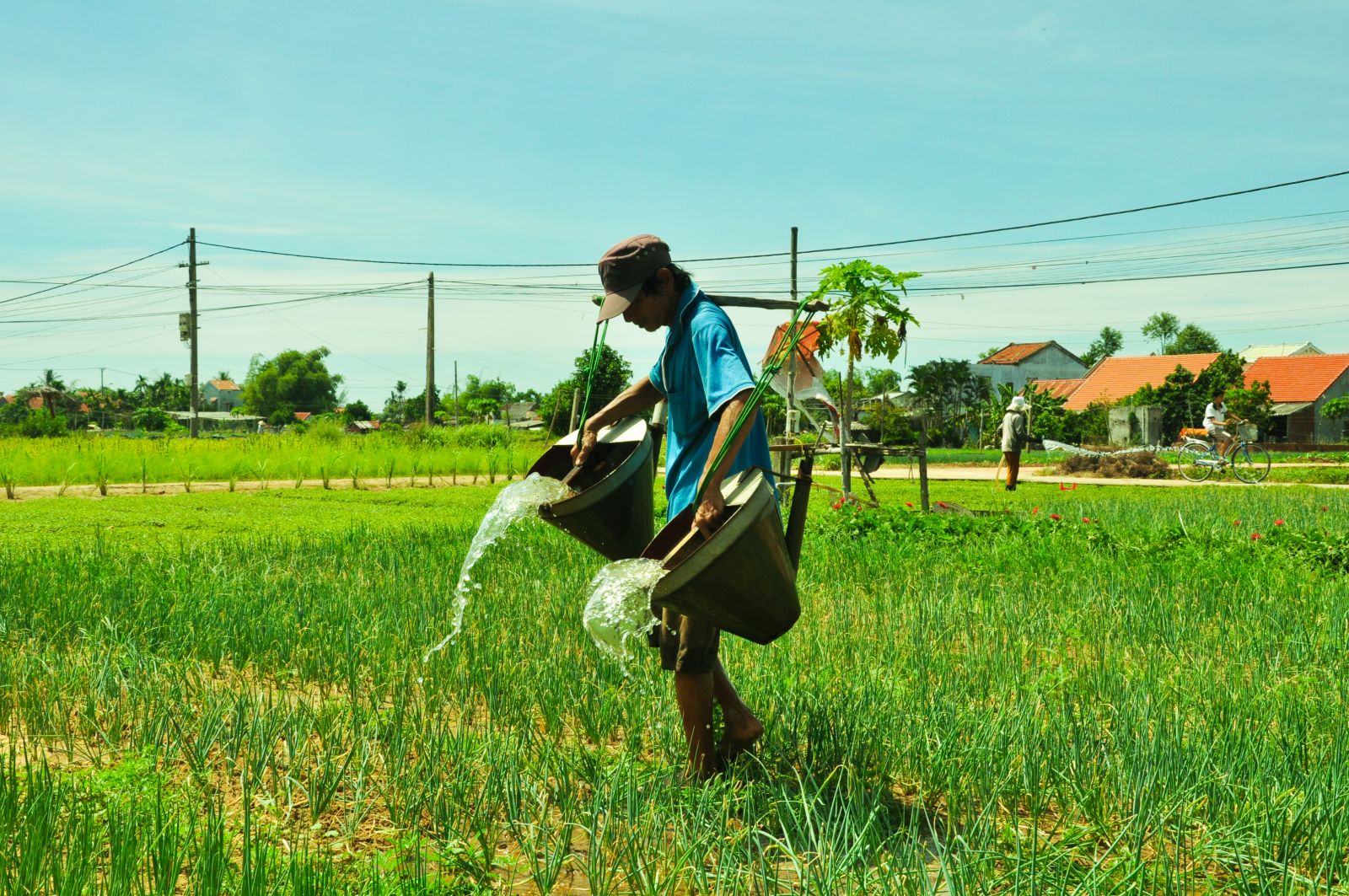 From the Ancient Town, tourists can get to Kim Bong by taking a boat trip crossing Thu Bon River. This the origin of a lot of talented carpenters who built the Hue Imperial City. Back to the late sixteenth century to early seventeenth century, Kim Bong carpentry flourished and divided into three groups: ancient architectural construction, civil wooden furniture and shipbuilding. 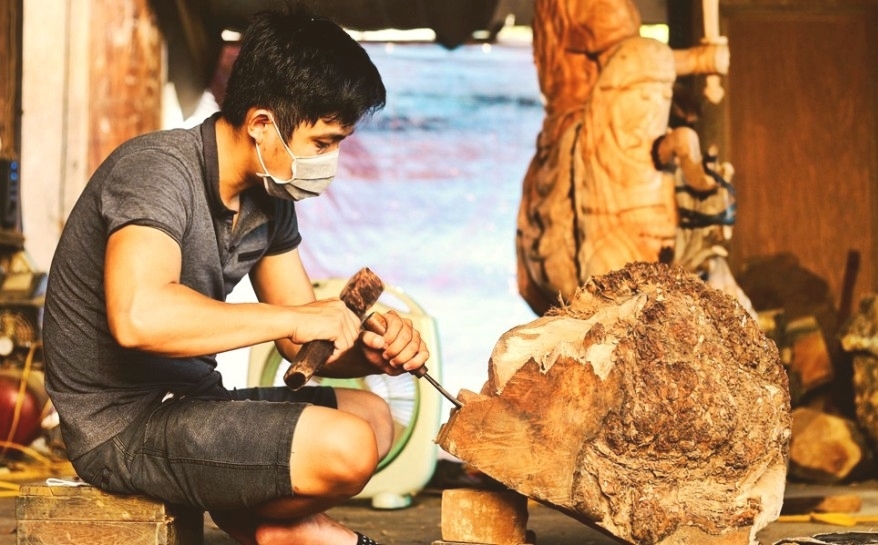 Thanh Ha village locates 3km to the West of Hoian Ancient Town. The best way to visit there is by boat along Thu Bon River.

Most of the citizens here are from Thanh Hoa, a province locates in the Central of Vietnam, 700km to the North of Hoian. They came to Fai Fo (Hoian) around the end of fifteenth century, when pottery was primarily used.

By visiting Thanh Ha Village, tourists can learn how to make do the pottery works (or just watching the professionals), learn all about clay and pottery works, or even buy a souvenir. Furthermore, tourists can catch up with a lot of fascinating creations, including Taj Mahal or The Sydney Opera House, why travel the world when you can go to Thanh Ha Pottery Village? 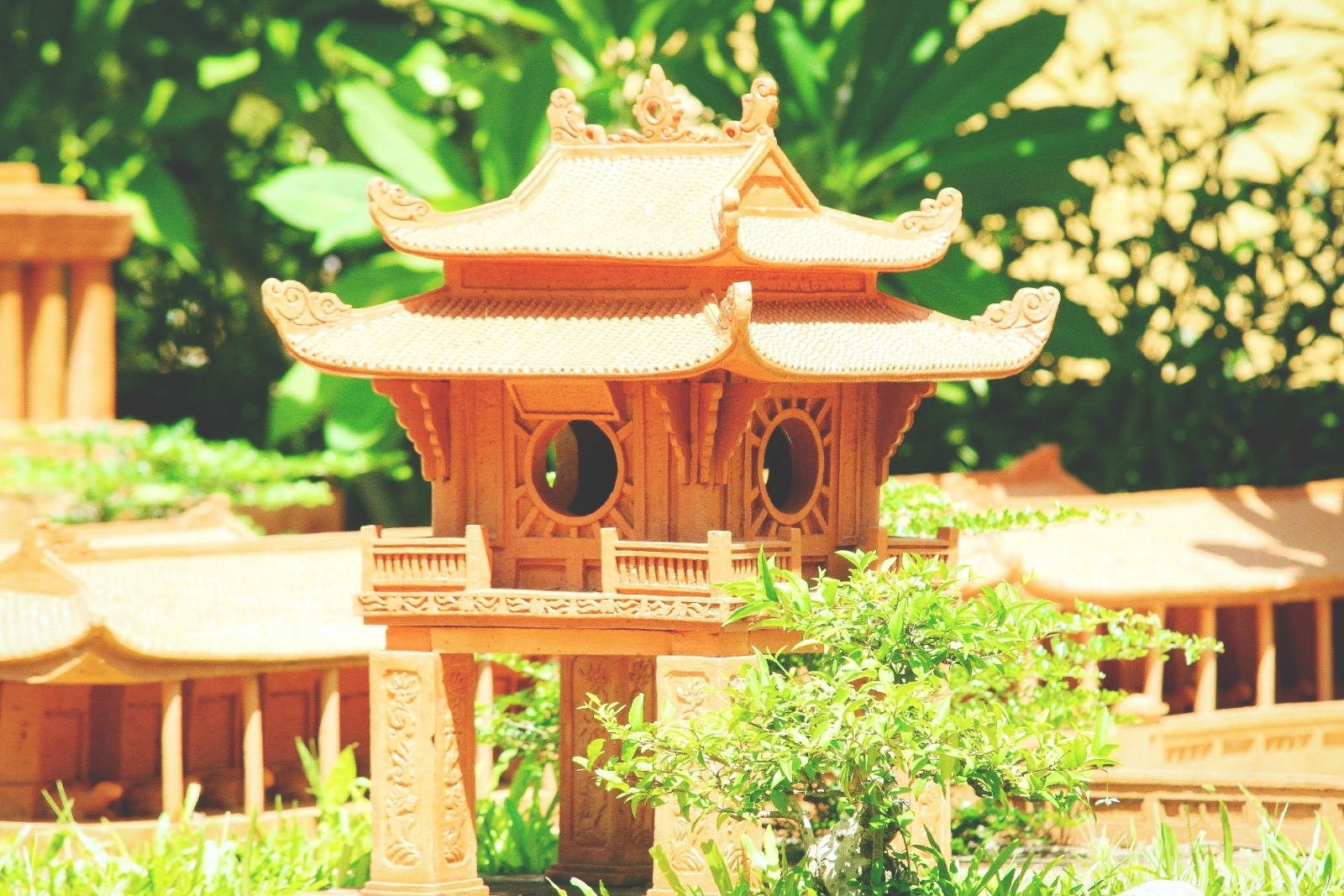 Why travel the world when you can visit Thanh Ha Pottery Village?

The most spectacular site in Vietnam, My Son Sanctuary, locates 40km to the Southwest of Hoi An Ancient Town. This is the remains of a series of impressive tower temples in a dramatic site where was the religious and political capital of the Champapura (Sanskrit for City of the Cham people). My Son Sanctuary is also the place where powerful kings and priests rested in peace.

My Son Sanctuary is often compared with other historical temple complexes in Southeast Asia, such as Borobudur of Java in Indonesia, Angkor Wat of Cambodia, Bagan of Myanmar and Ayutthaya of Thailand. In 1999, My Son has been recognized by UNESCO as a World Heritage Site, as an example of evolution and change in culture, and as an evidence of an Asian civilization which is now extinct.

It took over ten centuries to build this complex, from the fourth century. My Son Sanctuary’s architecture is strongly influenced by Indian architecture and culture. Their masonry skills and techniques are still a mystery until now, Cham people didn’t use mortar to mount bricks together, and until now their walls still gather no moss.

After the Champa Kindom faded out, My Son Sanctuary was a forgotten place until it was discovered and studied in late nineteenth century by French archeologists.

During its heyday, Hinduism was the most popular religion of Champa Kingdom. And Cham Kingdom also used to be one of the most vibrant Hindu cultures of the world, not only in Vietnam but also in Cambodia (Angkor), Indonesia (Java and Bali). 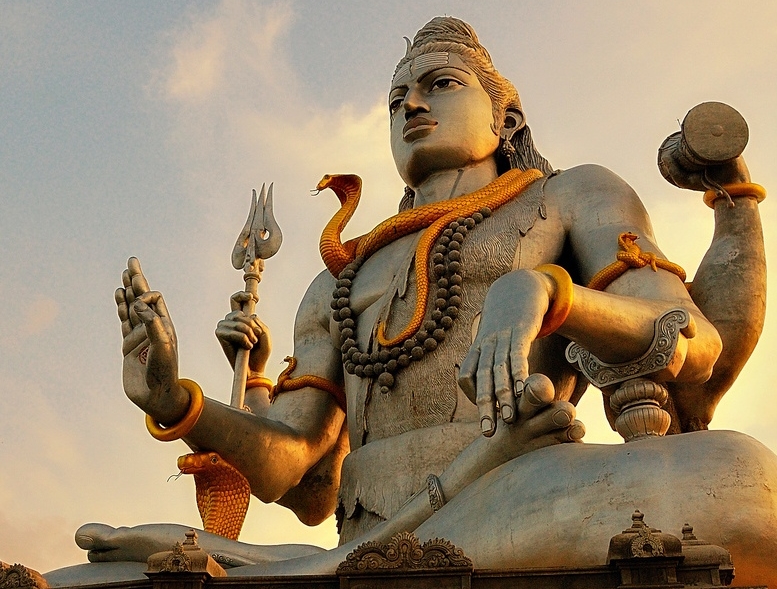 A Statue of Shiva in Murudeshwar, India

The major and oldest sect in Hinduism that reserves Shiva as the Supreme Being is Shaivism. The main symbols of Cham Shaivism were the linga, the mukhalinga, the jaṭalingam, the segmented lingam, and the kosa.

Then after tenth century, Islam made its way into Cham community and until seventeenth century, it became one of the most popular religions of Cham people.

That is to say, My Son Sanctuary is one of the most spectacular sites of Vietnam and it’s worth a visit for anyone who loves exploring culture and history.

The remains of Shiva Statue at My Son Sanctuary, Hoian

Besides history and culture, tourist can also enjoy the beautiful nature by visiting a world Biosphere Reserve recognized by UNESCO – Cham Island.

Cu Lao Cham is a group of eight small islands, which are just 15 minutes away by canoe from Cua Dai harbor. There are several sites from the Sa Huynh culture, Champa and even Dai Viet (the former Vietnam) here, but these cannot compare to its fascinating view of the sea, beaches and mountains.

Coming here, tourists will find themselves relaxing on wild beaches, catching the sunrise on the top of the mountain, enjoining endless hours of snorkeling or venturing themselves into water sports.

The best time to visit Cham Islands is from April to September, when it’s still sunny and dry. 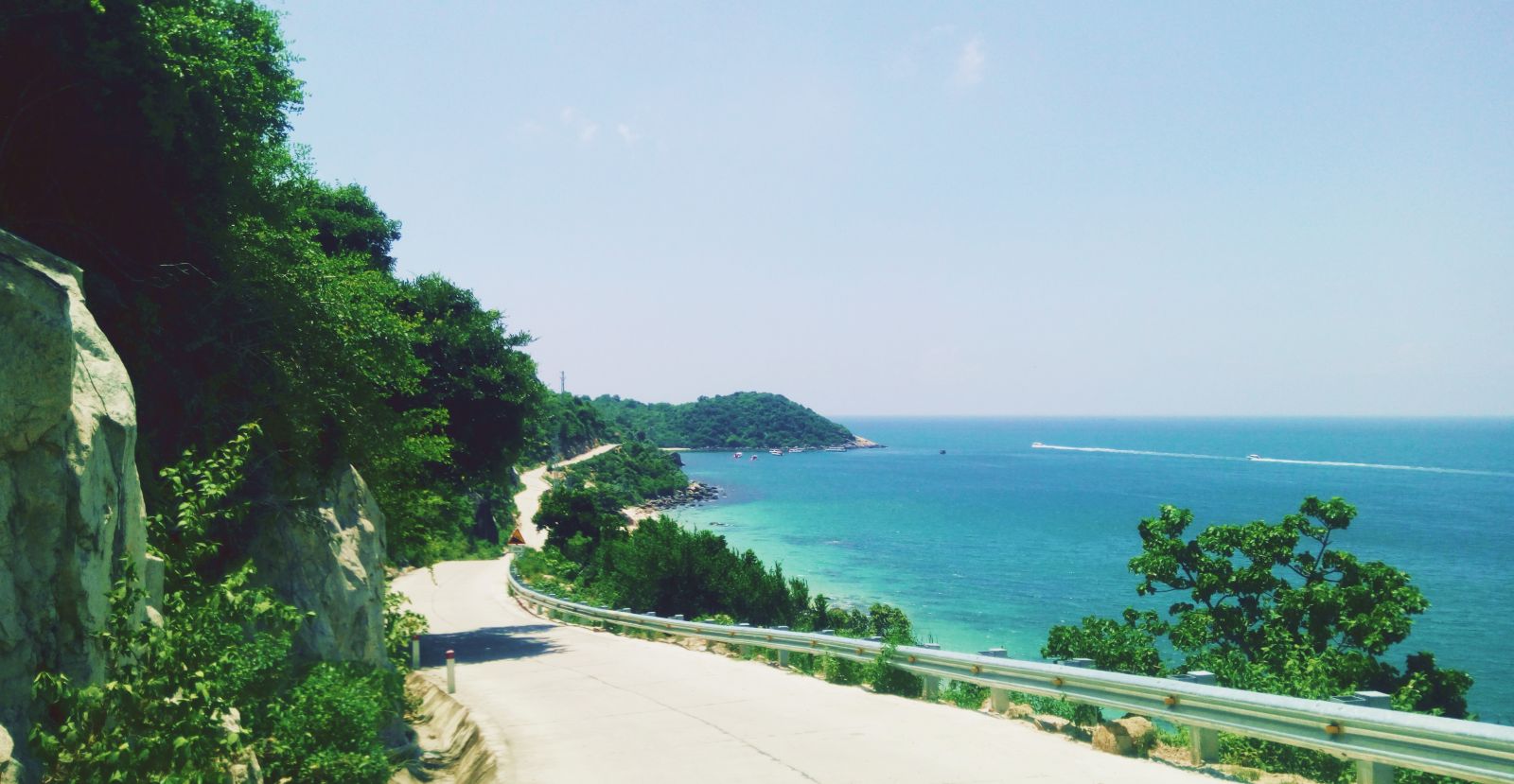 Run away from the world by coming to Cham Island... 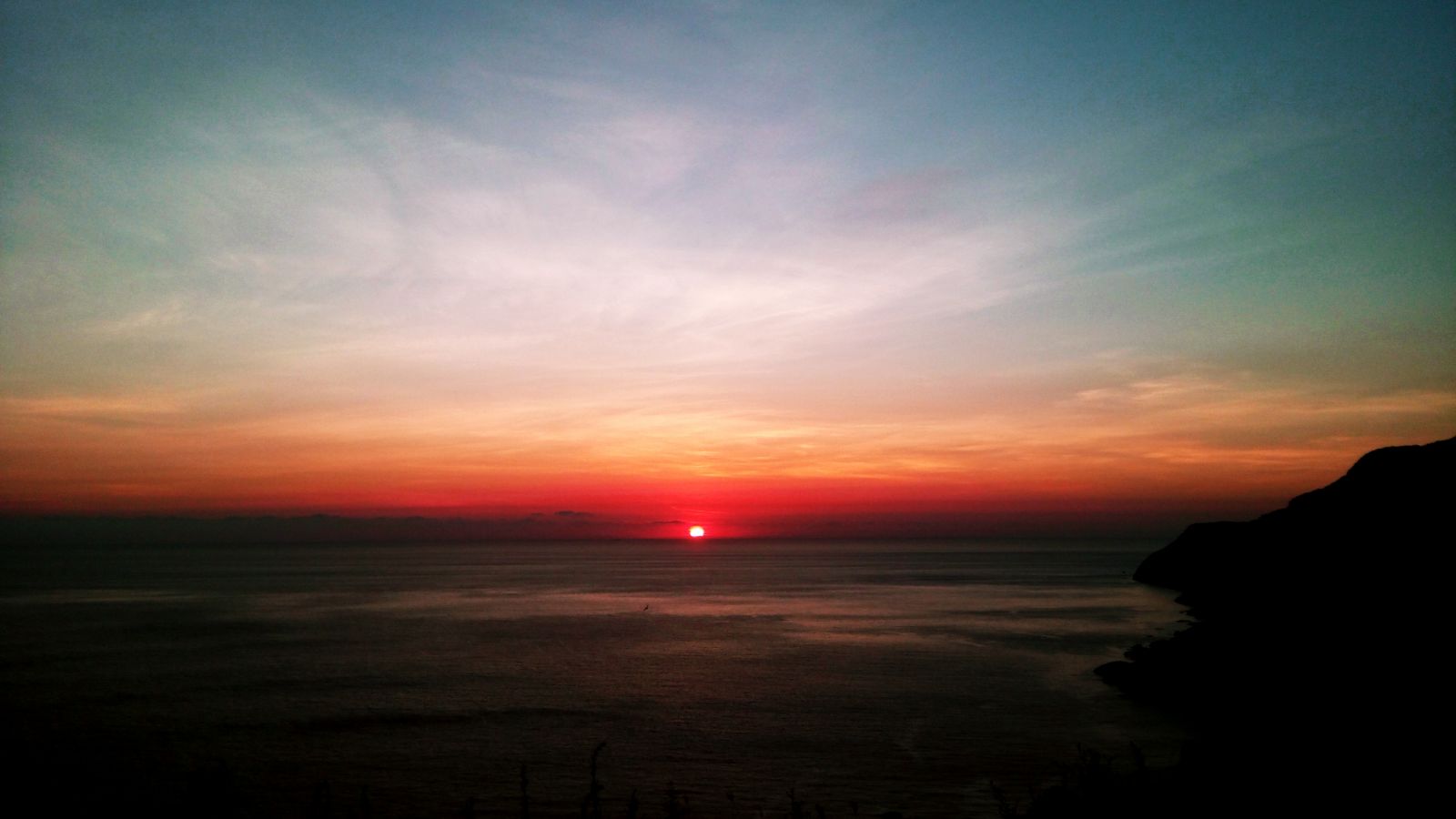 ...and get up early to catch this fascinating sunrise.

In summary, Hoian is the destination which fulfills all the needs of tourists, from an adventures hunger to a history lover!